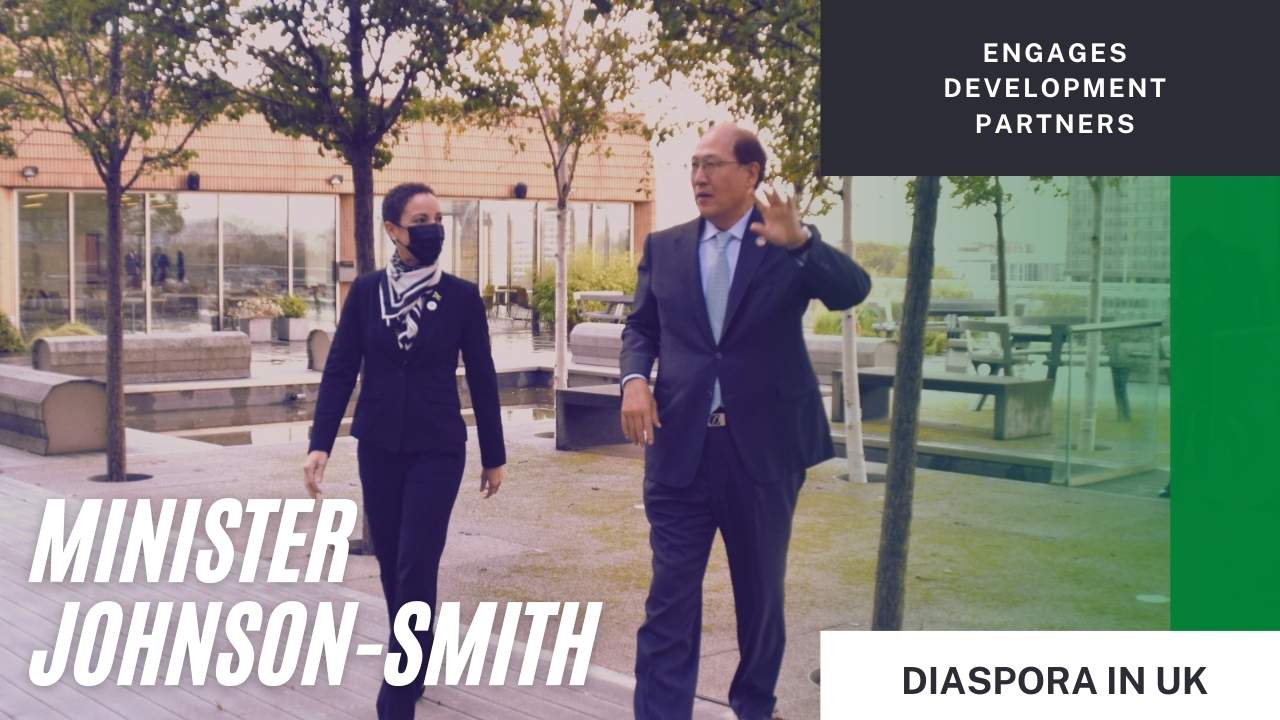 Johnson Smith Engages With Development Partners And The Diaspora

Johnson Smith Engages With Development Partners And The Diaspora

Senator the Hon. Kamina Johnson Smith, Minister of Foreign Affairs and Foreign Trade, has just concluded the London leg of her three-city working visit to Rome, London and Glasgow. In London, she engaged in discussions critical to Jamaica’s development with UK government officials and met with the Jamaican Diaspora. The Minister also promoted Jamaica’s candidature to the International Maritime Organization (IMO) Council for 2022-2023, during her meetings with representatives of IMO member states.

“Officially launched in April, this year, by the Prime Minister, Jamaica’s candidature to the IMO, Category C, underscores the importance placed on the maritime sector, by the Government of Jamaica.  We are confident that Jamaica can continue to substantively contribute to the work of the organization and ensure that the maritime concerns of Small Island Developing States (SIDS), like Jamaica, are addressed,” Minister Johnson Smith shared.

Category C of the 40 member state IMO Council is comprised of 20 IMO member states with special interests in maritime transport or navigation and Jamaica, which falls in that category, has been an active member of the IMO Council since 2007.

The high-level officials with whom the Minister engaged included The Right Honourable Elizabeth Truss, MP, Secretary of State for Foreign Commonwealth and Development Affairs and Minister for Women and Equalities; Lord Tariq Ahmad of Wimbledon, Minister for South Asia, the United Nations (UN) and the Commonwealth; and Ms Wendy Morton, MP, Minister for Europe and the Americas who now has responsibility for the Caribbean. The Minister will also pay a courtesy call on Mr Kitach Lim, Secretary-General of the IMO.

The Minister met with the Jamaican Community in London and also the Jamaican High Commissioner to the United Kingdom (UK), His Excellency Seth George Ramocan and staff at the High Commission. In her meeting with Jamaicans in London, Minister Johnson Smith expressed appreciation to the Diaspora for their tangible and critical support to Jamaica’s COVID-19 response and encouraged continued support, especially as the Government advances its vaccination programme.

Minister Johnson Smith arrived in London following her departure from Italy on Wednesday, October 27, where she participated in the 10th Italy, Latin America and the Caribbean Conference, chairing the panel on Planet, which focused on the sea, climate, coastal and port towns in keeping with the theme of the Italian G20 Presidency on People, Planet and Prosperity. From London, she leaves for the highly anticipated Climate Change Summit (COP 26) in Glasgow, Scotland, at which the world’s nations will decide on the desired accelerated actions aimed at meeting the goals of the Paris Agreement and the UN Framework Convention on Climate Change.