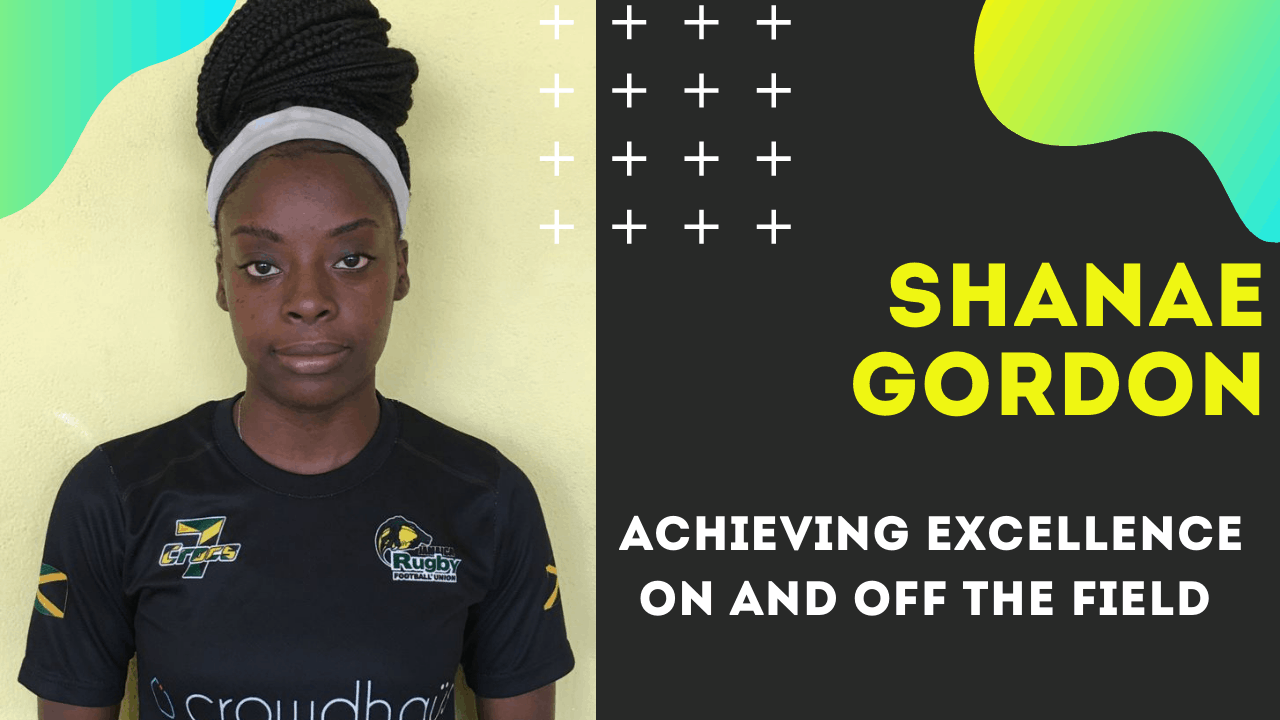 Shanae Gordon is used to clutching a ball and outsprinting rivals in her daily practice and play. In the classroom, the national rugby player proves how much those qualities are part of her educational habits.  Shanae has grabbed a scholarship provided by the Jamaica Olympic Association (JOA). She is running with it to now earn an academic scholarship for final year studies.

“After receiving a grant from the Jamaica Olympic Association (JOA) through the Jamaica Rugby Football Union (JRFU), I must say my journey has been tremendous and exciting. In receiving my grant, it has reduced my financial burden, and it is ensuring my success in the future,” said Gordon.

Correspondingly, Shanae observed that she had been emboldened by interview opportunities. These have resulted from her being a historical recipient of the bursary. She added, “Subsequent to getting this award, I received multiple interviews from both radio and TV stations about being a recipient of this sporting grant, and it was just the beginning of my journey. I tend to be a very shy person. However, after completing several interviews, I became more confident and outgoing.”

Continuing, Gordon said, “The thought of getting help to finish my third year has given me a very strong drive, whereas it motivated me intrinsically. I have been doing well academically, but this grant allowed me to step out of my comfort zone and make a lot of improvements. Regardless of the difficulty adapting to the online learning, I couldn’t find the courage to complain due to the fact that it was an adjustable situation.”

Correspondingly, Ryan Foster, Secretary-General and CEO at the JOA said that this is the sort of impact they intended in creating the scholarship.  That is, to advance the educational perspective of athletes in becoming wholesome individuals.

Foster said, “The JOA scholarship was created to provide an avenue for our athletes to excel not only on the field of play but in the classroom. Our expansion of the educational perspective, we believe, is another avenue within which our athletes can benefit from our expansive member services. This is in addition to our Internship Programme, our IT shared services, as well as our recently launched Equipment Grant.”

“The JOA will continue to put our athletes at the front, and we are excited to witness the success of Ms Gordon not only in the classroom but also on the field where she will represent the country in the upcoming Olympic Qualifiers in June.”

“Ms Gordon and all the JOA scholarship awardees are the first recipients of what we consider a part of our legacy, one which will lay the foundation for many years to come,” added Foster.

Novelette Harris, Member Services Manager at the JOA, noted that Gordon’s success proves the balance is quite achievable. “We are proud of our scholarship recipients and are happy that they continue to do well in their capacities of both athlete and student,” said Harris. “This serves as a demonstration that there can be a balance between sport and academics. The JOA will continue to provide the necessary support, financially and otherwise.”

Gordon said Harris has been supportive of her efforts. “This grant has changed my way of thinking, and I appreciate the fact that it didn’t only come with funds for me to finish college, but it came with a strong individual. Ms Harris has continued to tell me not to give up. She helped me to believe in myself more, and I just want to say thanks again to the Jamaica Olympic Association (JOA) for granting me this scholarship. Great things are yet to come,” Gordon promised.

Chairman of the JRFU, Jerry Benzwick, said the association is proud of Gordon’s academic achievements, noting that they complement the JOA’s vision of “rounded athletes.”

“We at the JRFU are extremely proud of Shanae Gordon, our first rugby union recipient of a JOA Academic Scholarship. She has spent her time over the past school year maintaining a high standard of study throughout. Shanae has proven herself an excellent ambassador for sport,” said Benzwick.

“We share the JOA’s vision of rounded athletes who can move beyond their sport and be exemplary citizens who contribute positively to the development and growth of Jamaica,” added Benzwick. “Shanae is now in preparation to compete with her team in the Olympic Qualifier Repechage in June, and we look forward to their qualifying.”