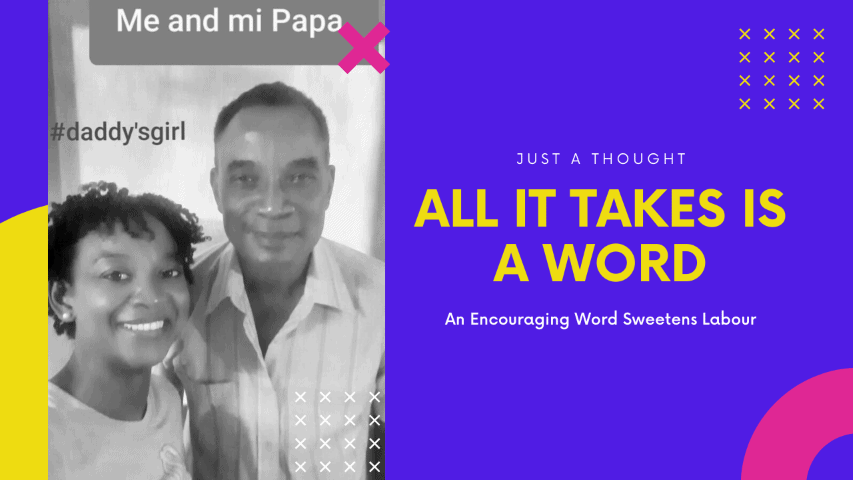 I have a love for cornmeal porridge since I was a child. You might not know him, but my Dad would tell you that you could give me porridge morning, noon or night. I would watch persons, especially my grandmother, preparing porridge.

So one day I decided that I was going to cook porridge. I checked that all the ingredients were in the cupboard. I woke up early and started on my first cooking practical. To the best of my ability, I followed the procedure based on my many observations. Now time for the spicing and sweetening….. I poured one whole tin of condensed milk in the pot, and all now it wouldn’t sweeten. Thinking that was all? No, there was more! It had lumps all over. So here I was feeling so disappointed with my lumpy-lumpy cornmeal porridge.

I was receiving criticism from those in the house, then came my Dad with a pleasant voice, made eye contact with me, and said, “lumpy-lumpy, that’s how mi like it.”

Immediately a smile came on my face, and I felt like a big chef. Of course, I know no one likes lumpy-lump porridge but Hey! That comment right there was just amaaaazzzing. Every other voice, including the voice in my head, were silenced. By the way, I added salt, and the entire tin milk came alive.

It has been many moons now, and I can still hear my dad’s voice in my head saying, “A suh mi like it” There are times when I attempt to make something, and it didn’t turn out how I intended, and I could imagine my dad giving his nod of approval for my efforts.

The voice of fathers usually carries more weight. Even if it’s a father who is not always around, if the mother is the one who punishes and does the talking, we find children will move when dem fada talk. So dads, use your superpower voice and presence to affirm your children.

How we respond to our children can make them or break them so choose wisely.

My dad chose to appreciate my efforts on my level. But check me out now….I can do a cooking tutorial for cornmeal porridge. It’s now among my family’s favourite.

So parents and guardians observe what your children are doing to get your attention/approval. Their actions could be a cry for you to look at them. Show interest in them developing a skill or talent. Let your response be that powerful, quiet voice in their heads that will silence the noise around them in their due season. Do as my dad did with my lumpy-lumpy cornmeal porridge.

0
20   0
previous Faithful Are The Wounds Of A Friend
next We Are "THEM": An Open Letter to Survivors

Service ABOVE Self: Mr Sewell and Miss Walford