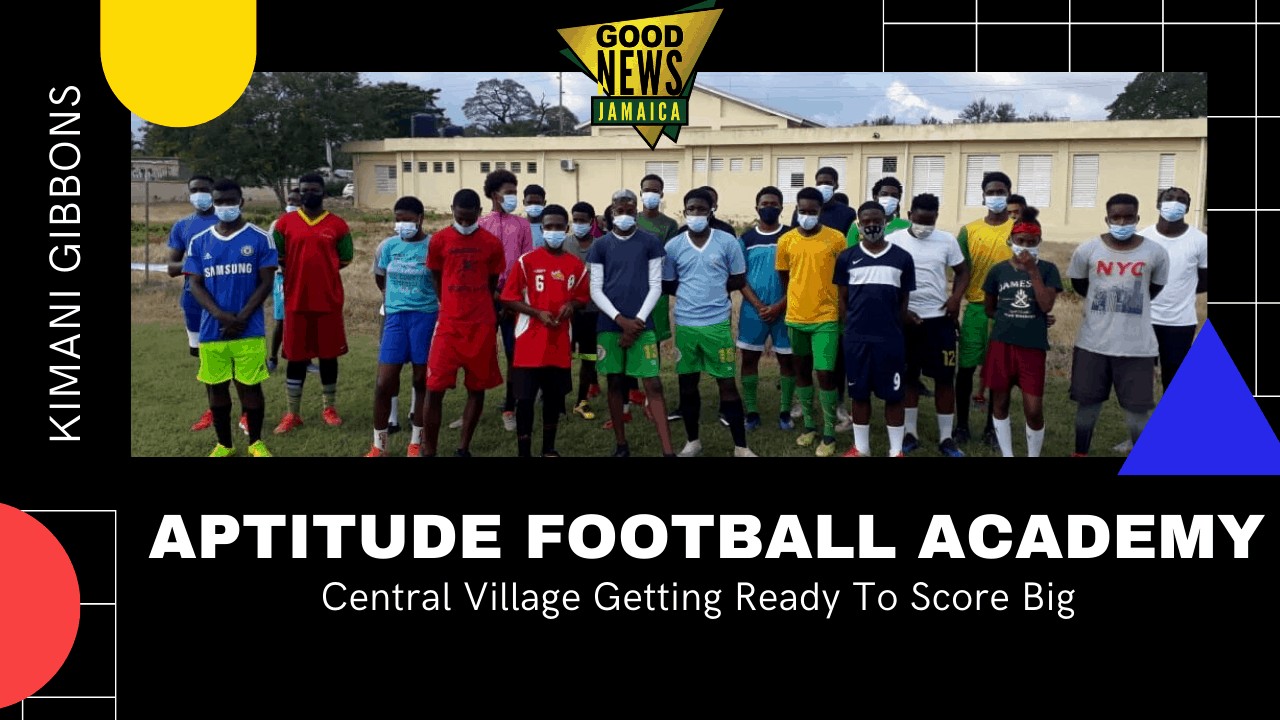 In a quest to aid the development of talent and help shape lives away from violence, Kimani Gibbons has launched the Aptitude Football Academy in Central Village, St. Catherine.

On February 13, 2021, the academy kicked off, focusing on developing players from four to 20 years. At this point, approximately 60 players are enrolled and participate in the camp. Held at the Community Centre (next door Red Cross) on Andrews Avenue on Saturday afternoons. The camp begins at 1:30 p.m. with the four-year-olds.

“I was always passionate about having a football academy in my area because growing up as a youth, I have never had the opportunity to train and develop my skills from a tender age,” shared Gibbons, a former captain of Jamaica’s Under -17 and Under-20 national football teams.

At age 20, Gibbons himself is quite young and shown himself to be a leader. He has excelled at sport and accomplished much in football. He has already won the National Premier League title with Portmore United in 2018.

A central defender, he also captained Portmore United at the Under-13, Under-17 and Under-20 levels. Recently, he transferred to Cavalier Soccer Club.

Kimani was introduced to the game at a tender age. He cites advantages and wants to give youngsters in his community a similar opportunity.

“Ninety per cent of Jamaica’s football players start training when they are in high school. Ten per cent start when they are in Primary/Prep school. Having a football academy in my community will definitely help children to start pursuing their dreams at age four. So they can get the opportunity to learn the sport and help develop their skills technically, physically and tactically,” he shared. “So going further in their career as a football player they will be able to know the basics in the sport.”

Gibbons grew up and still lives on Russell Avenue in Central Village. He has attracted support for the Aptitude Academy from Football for the World Foundation USA, Nebraska.

Monica Bosiljevac, Executive Director of the Foundation, said: “I’m looking forward to seeing how Kimani grows the academy. It is always great to see more opportunities for boys and girls to play football and develop as teammates and leaders.  Even more importantly, it’s inspiring to see a footballer like Kimani who decided to pay it forward and give back to his community through football.”

Much of Gibbons’ early involvement in sports took place at St. Jago High School, where his capacity as a leader was exemplified. He earned roles as captain of the Under-14, Under-16 and Manning Cup football teams. He also represented St. Jago in cricket and track and field.

In 2017, Gibbons transferred to Wolmer’s Boys’ School for sixth form and represented the institution in the Manning Cup competition.

Given his level of exposure, Gibbons stated his drive is to assist those in his community afflicted by gun violence.

The Passion Behind the Academy

“I was passionate (to start the academy) from I was at St. Jago High School, but I never had the equipment. This time I decided to start with what I had. I started with two balls and 10 cones,” he said. “At the moment, I’m seeking sponsors who can donate items to the academy such as balls, cones, equipment, gear, etc..”

Continuing, he stated: “My passion for helping others has been evident in my involvement, being one of the few from the inner-city area who can get the opportunity to represent the national team at the junior level. So it is a pleasure for me and my community and a lot more people to see a young youth at age 20 doing something to elevate the community and its children.”

“This institution is also a plus for the community and the country. The community itself has a bad reputation [for] violence. So this academy will actually prove that the community is not just about violence. It is about positivity and actually taking the younger ones away from the violence.

“This allows the children to actually have something to do in their spare time, so they can focus on becoming a better version of themselves without being distracted by other stuff that can lead them astray or into violence,” Gibbons explained.

Even though the academy is in the embryonic stage, residents are taking note. They are encouraging Gibbons’ enterprise not only with words but effort.

“I’m actually feeling good for the support I’ve been getting from residents in the area and from my friends. Before I started the academy I had to get the pitch in a way to make it ready to accommodate children and people in the community, to prepare the field; and my friends worked with me to clean up the field,” he said.

“The residents encourage me not to give up and to continue doing things like this that can help the younger generation.”