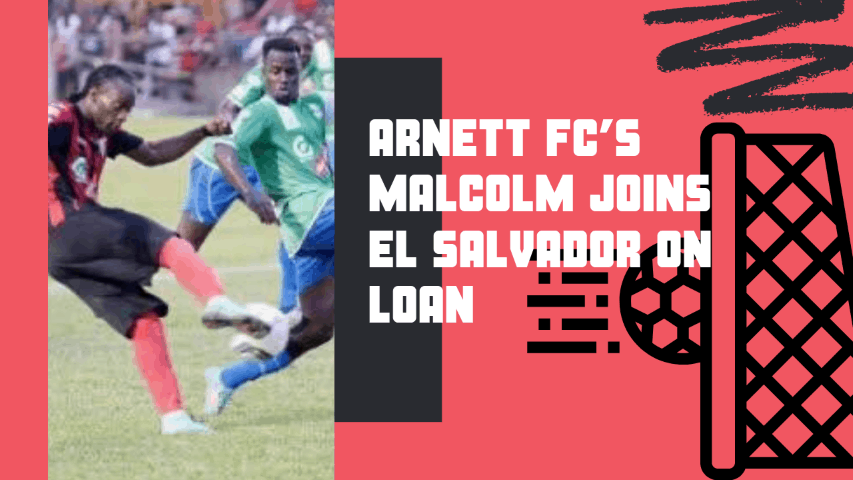 “It is a very good opportunity for me to go to El Salvador and establish myself,” said Malcolm.

“It is a stepping stone. My aim is to go there, do well and hopefully another door will open from there,” he observed.

With football competitions in Jamaica suspended from March 2020 due to the COVID-19 Pandemic, the opportunity comes at a perfect time for Malcolm and the Jamaica senior team. Another player will be engaged in the top-flight competition ahead of CONCACAF World Cup Qualifying.

Malcolm, who is popularly known as ‘Tull’, had gotten some useful match practice with the Reggae Boyz on their recent Asian tour, where he played in both international friendlies against Saudi Arabia, which ended 0-3 and 2-1.

He earned a spot on Jamaica’s National team based on his consistently good showing for Arnett Gardens FC. He scored frequently and was among the league leaders before the COVID shutdown. At the time, Malcolm had scored 12 goals. This feat was the joint leading tally for the 2020-21 competition alongside Dean-Andre Thomas, Colorado Murray and Chevonne Marsh.

Malcolm is a champion footballer who twice won the National Premier League title at the AGFC. He will be engaged with Deportiva Chalatenango until the end of the 2020-21 football season.

Malcolm was also a member of multiple winning teams at St. George’s College, where Neville ‘Bertis’ Bell coached him. He also attended and played football at the University of Tampa and scored heavily while representing teams in the Florida area. He played for the Canyon Mavericks and Tampa Spartans before a Premier League club Waterhouse FC campaign, where he recorded seven goals in 19 appearances.

“He opens doors for other Arnett Gardens players to move to the next level. That is our aim at the club right now, that is the vision, to get players overseas,” said Alex Thomas, head coach of Arnett Gardens FC.

“I’m overwhelmed. I’m very proud of him. He has done well for himself in the 2019-20 season, although it is a short stint for the league. He was the player who was carrying the bulk (of the attacking), scoring week in, week out for our team,” Thomas observed.

A skilful and very speedy striker, the 31-year-old Malcolm joined Arnett Gardens FC in the 2012-13 Premier League campaign and has played a major role in the club’s two title triumphs since. He has scored 44 goals in 75 appearances for the club.

“(He) earned a call to the Jamaica setup and I’m very proud of him, especially at his age right now. It is second to none,” Thomas noted.

“I’m very proud of him as a member of the Arnett Gardens family. I know he will go there and do his best and represent the red and black right out,” said Thomas, referencing Arnett Gardens FC’s club colours.