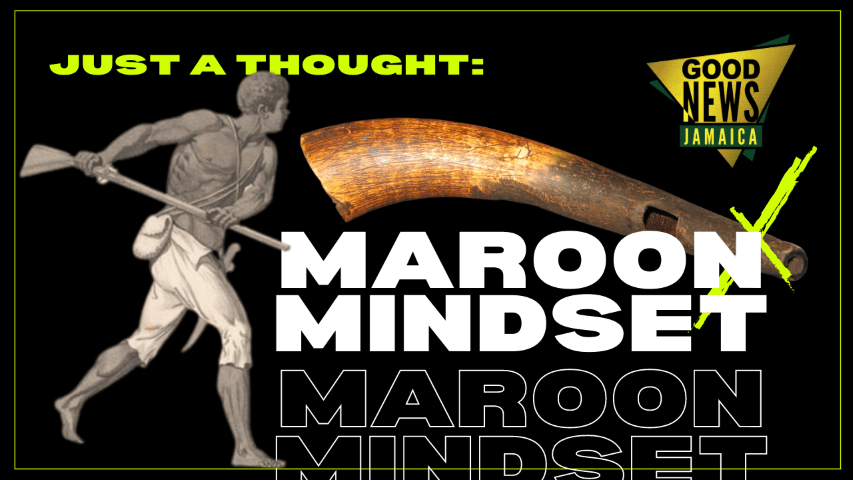 Maroon mindset, what does that mean? People frequently ask me. To capture the essence of what I mean. My maroon mindset is the driving force in my quest to self actualise. Let’s take a few steps back before going forward.

Who Are The Maroons?

The maroons were rebellious runaway slaves who fought the oppression of slavery and developed independent communities in Jamaica. I could go on and on, and much has been documented about the maroons. However, go research for yourself. You can help to promote the culture that has shaped the lives of many Jamaicans and friends of Jamaican culture. Here’s a good place to begin your quest https://en.wikipedia.org/wiki/Maroons

I am a proud maroon. My dad instilled in me a pride in my maroon lineage. He confirmed that his paternal ancestors hailed from Beth Salem in St Elizabeth, a few miles from Accompong. While I can’t recall ever visiting Beth Salem when we used to go for holidays in nearby Maggoty, where our family had subsequently relocated to. I have plans to visit and see it with my very own eyes at the first opportunity.

Previously I have, and somewhat ashamedly, admitted that I found my “maroon mindset” relatively late in young adulthood. I now can reconcile why I had not been a vocal proponent of maroon culture and the ideology. It is a life that teaches you to respect your culture, to learn from your elders and be proud of who you are. I can relate to the powerful lyrics of what it is to be “free” on what Chronnix described as “captured land” in his hit record of the same name. The grip of colonialisation was too tight on our young minds.

As Frederick Douglass, the abolitionist, said, “knowledge makes a man unfit to be a slave”. Therefore, reading about the history of over 400 years of slavery and the relentless fight for freedom helped shape my Africanism and, subsequently, my pride. Unfortunately, some people see my Afrocentricity is an act of rebellion in my professional life. This is thankfully less so now, which is a sign of progress in the wake of recent years’ racial tensions and movements.

As a nurse academic and a compassionate leader in the UK, I regularly contribute to international research and academic publications and speak at events and in the media. I have, in recent years, embraced the liberating practice of the healing art of poetry. Proudly, I performed at the Jamaica Poetry Festival in 2020 and included a poem on the maroons in my performance.

Correspondingly, someone recently described me as a vocal equality rights advocate. Not to mention a leader who uses her Youtube channel, Maroon Mindset podcast, and Human Touch blog to speak truth to power.

Maroon mindset describes my way of viewing the world. It represents my world view or the paradigm in which I can bounce back from setbacks. I use roadblocks as hurdles to jump over. I’m determined and “hard ears” against those bad minded people. After all that, I still come out victorious even when all the so-called stacks are against me. I think of it like this; if my ancestors could so steadfastly fight their oppressors with such zeal and determination. If they caused their oppressors to sign a treaty to leave my ancestors alone, then I can overcome my challenges. It’s not easy. It is tough.

Yet, there is a peace that engulfs me. Knowing that, like our foreparents, all those years ago who used guerilla warfare. The ones who used mountainous terrain to their benefit. I too am not afraid to fight against injustice. Call out hypocrisy use my talents to mentor and coach others to be their best selves.

As mentioned above, being proud of my ancestry that I knew relatively little about was not on my “to-do list”. In reflection, I would say that my maroon mindset found me. In the midst of racial discrimination and injustices in the workplace, I embraced rebelliousness. I welcomed the ingenuity and agility of my ancestors. I started by speaking my truth. Being an advocate, speaking up for those who can’t. Fiercely defending the right of freedom and helping others to freedom really appealed to me.

I encourage and implore you to find your inner strength. Find your maroon mindset to overcome your obstacles, achieve your goals, and self actualise. Let’s keep the culture alive. Let’s soun’ di abeng and celebrate our maroon heritage.

0
49   0
previous Just A Thought: Her Black Skin is Part of Her Extreme Beauty
next Faithful Are The Wounds Of A Friend