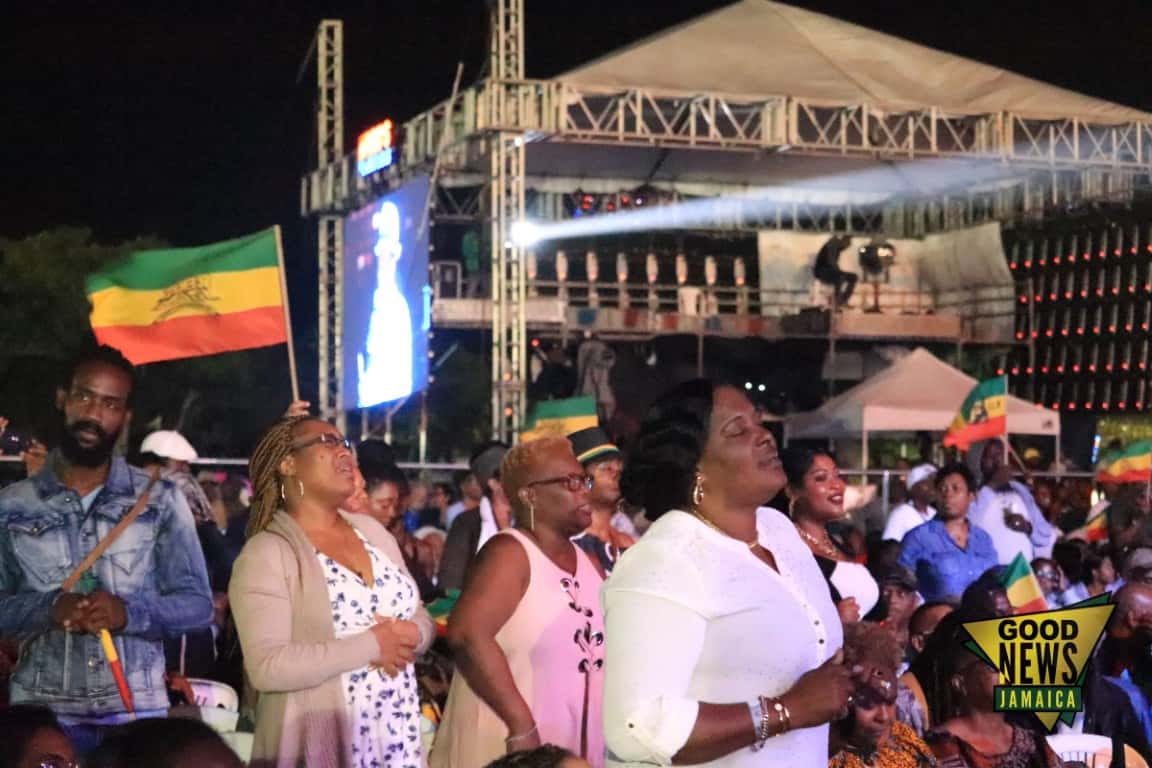 What better way to start off the year than 2 nights of good food, excellent music and an incomparable showcase of our culture. Despite the rain, both patrons and performers basked in the combination of reggae and blessings. Patrons were excited to see the stellar line-up of acts. One patron, in particular, was expectant to see how the ‘young acts’ matched up to the stalwarts:

The two-day festival has been known as the only all-inclusive festival of its kind for the last 27 years. Not only does it boast the combination of culture, heritage, our indigenous music and healthy cuisine, it also contributes to the tourism sector. For years, the festival has been a tourism magnet. Consequently, worldwide Reggae lovers saturated the fields of Grizzly’s Plantation in St. Ann last weekend. Those who could not physically attend were treated to only the concert via an online stream.

Stepping out of the Box

Organizers stepped out of the box this year to ensure their patrons received the best experience. For the first time, the event included both comedy and a soundclash between two popular sound systems. Throughout his set and long after the end, Christopher ‘Johnny’ Daley, had the crowd in hysterics. Combining both the use of music and comedy, Johnny delivered an unforgettable 30-minutes performance. Titling himself the ‘Bounty Killer of comedy’, he brought out his protégé ‘The Cross-eyed Villian’, who proved he is now seeing “2020” to close the segment.

Despite the persuasion of critics to exclude a dubplate sound clash from the festival, the organisers still included it. The clash between Dynamq Sound International and Black Scorpio, according to many patrons was the highlight of the festival. Patrons were left wanting more of the banter between Dynamq’s youthful Dj, Kennedy Loryaye, and veteran Dj Jack Scorpio and his son. In the audience, Loryaye was declared the winner but official voting was not conducted.

One of the things that stood out about the festival was its inclusiveness. Saluters were not only treated to the predominant reggae and Rastafarian hits but also to dancehall and gospel. This year featured dancehall artistes such as Chronic Law and Chi Ching Ching who had the crowd deciding whether they wanted ‘roast or fry’ breadfruit in the early hours of Saturday morning. The rain wasn’t the only thing that ‘blessed’ the venue over the weekend as gospel artists Rhoda Isabella and Jermaine Edwards poured out their hearts and invited the crowd into worship. Artists from the ‘Motherland’, Kenya’s Trecia and Uganda’s Bobi Wine, were also given the opportunity to perform in Jamaica. Both artists were grateful for the love, treatment and support they received:

The multitude was taken on a cultural journey with veteran artistes as well as new ones who spued their hits and introduced new singles. One new song which was well-received was Queen Ifrica’s dedication to the victims of violence against women. Her performance which consisted of reality songs was a crowd favourite. Saluters described her performance as authentic. Below she explains what authenticity means to her.

The man of the weekend, Tony Rebel performed a one hour set which was too short for the insatiable patrons. He performed hits such as ‘Teach the Children’, ‘If Jah’, ‘Sweet Jamaica’ and many more. Notis Heavyweight Rockaz made history by performing without their instruments. The producers turned artists were grateful for the opportunity to make their mark on the ‘big stage’:

Stalwarts such as Sanchez, Louie Culture, Toots and the Mayals, Errol Dunkley and George Nooks proved once again that their groove is secure. While the Reggae babies such as Mishieve, Chevaughn and Mortimer, without a doubt, left a positive impact on Saluters.

Health and the Environment

Since its inception, the preparation and selling of meat and alcohol have been banned from the festival. This has never been a problem as vendors over the years have found creative ways to prepare ital food which leaves patrons clamming for more. When asked about their reason for enforcing these dietary rules, organizers simply expressed that ‘you are what you eat and if you want to live a healthy life with good energy, you have to consume soul food’.

Patrons were continuously reminded of the importance of keeping their environment clean. It was refreshing to hear MC’s and organizers alike continuously ensure that Saluters knew the location of respective receptacles. In partnership with Recycling Partners of Jamaica, the venue had a surplus of garbage bins to ensure waste was properly disposed of.

The staging of Rebel Salute 2020 was a success. Aforementioned in our previous article, the Ministry of Culture, Gender, Entertainment and Sports was happy to be partnering with this great initiative. The Minister expressed that she was happy that her ministry was represented in a major way during the festival.

Not only did Rebel salute leave patrons excited for next year, but it also sent the organizers to the drawing board to figure out how to top this year’s experience.