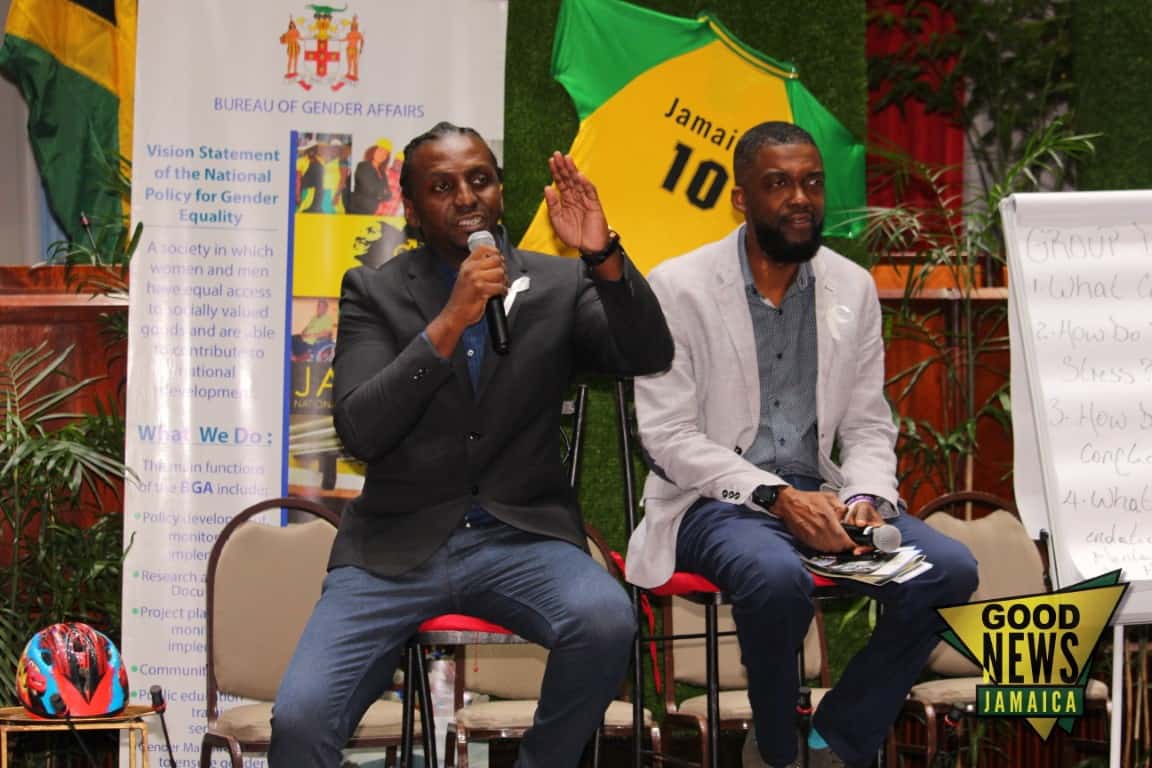 Over the past week, we have had the privilege of attending some very powerful workshops. All the workshops have been geared toward empowering, listening to, and guiding men to become and remain active.

The conferences were put on by many organizations, with one focus; Jamaican Men. CUSO International, a branch of the Canadian consulate, partnered with the Caribbean Male Action Network (CariMAN) to host a workshop/reasoning called Conversations on Gender: Man-to-Man. This was a refreshing workshop for men only. The men discussed various topics focused on gaining a better understanding of what society needs from men. We found out that men can impact, empower, and enhance society by having developmental thoughts. Even though our men are already active, focusing that activity to strengthening our position in society is paramount. We were challenged with many questions and then asked to analyze our responses. The purpose was to bring out the approach that best benefits the Jamaican society.

While in small groups sub-topics attached to pertinent questions became the focus. One such sub-topic was Sexuality and sexual behaviour. The questions pulled out some serious introspection, confession, and even understanding when we were exposed to answers we didn’t come up with as individuals.

For instance, sexual behaviour encompasses all the things we do to attract a mate. This is not men going after sexual partners but what we do to have them come after us. We started to question, ‘what do Jamaican women really want and also need in a man?’. With this intention, long and deep discussions ensued. It ended up with the attendees understanding that the only way to find out, was to ask. Instead of doing what we thought was ‘macho’ and ‘manly’, we could just ask and then govern ourselves accordingly. Of course, not everyone agreed to do that but everyone understood the benefits.

The workshop, facilitated by Dr Peter Weller, invited a cross-section of men who came to listen and learn.

International Men’s Day (IMD) also had a slew of workshops. The refreshing thing about IMD was that these workshops were not about pampering the men with fluff. The workshops were an active showing that society cares about how to ‘Bigup’ our men.

We visited the IMD celebration at the Jamaica Conference Centre. The celebration was put on by the Ministry of Culture, Gender, Entertainment, and Sport. IMD serves to highlight and celebrate the positive contribution of men to society. It also highlights the positive roles of men within their families, communities, and as part of the global village.

The government of Jamaica created IMD to do a detailed analysis of policies and the legislative framework, as well as initiatives which are in place for men and boys in Jamaica to achieve their full potential. It’s all about nation-building and supporting our men to be an active part in that.

This year the theme was “Building Strong Men through Health and Wellness: Balance di Ting”. Much of the focus dealt with the physical and mental health of the man. The desire was to create a space where men felt not only comfortable but supported on their quest to become positive role models.

The third initiative, titled above, turned out to be quite helpful for men. The workshop was hosted by the Jamaica Mental Health Advocacy Network. Whereas the title sounded off-putting, the actual workshop garnered abundant praise. Two of the attendees expressed their pleasure with the outcome. “Really enjoyed this forum. [I]Went with Dave Hazel. Some very open discussion and positive points made. And mostly 20+ and 30+-year-olds. All men. Some push back against the generalizations re men. It was mostly about [the] need for self-awareness, accountability and positive peer pressure. Good stuff. Need more spaces.” This is the sentiment of Dr Peter Weller whom himself held an impactful workshop the day before.

Professor Dave Hazel of the United Theological College had the following to say; “I want to underscore what Peter said about the forum yesterday. It demonstrated to me that men have an appetite to talk about men’s issues. I feel if we were able to plan some Town Hall meetings to facilitate discussion along with targeted interventions in boys schools, we could begin a movement that could generate some attitude and possibly behavioural change.”

The atmosphere in Jamaica is palpable when it comes to celebrating and empowering our men. Beenie Man would say, “Di Vybz is ‘ere”! and that vibe, if kept up, sees Jamaica actualizing as the best place to live, work, do business and raise families.