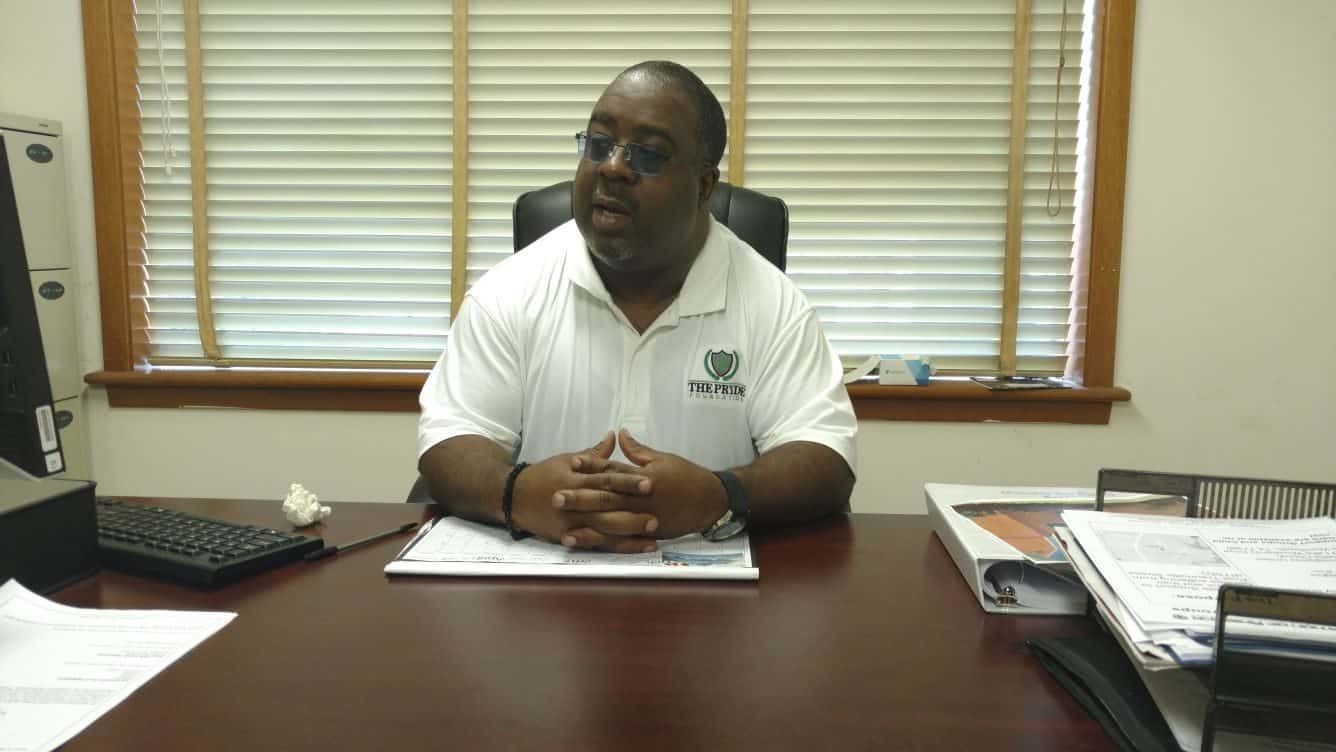 “Replace negative thoughts with positive ones and you’ll start having positive results”. Living by this puts despondency at bay and lessens unnecessary anxiety. This sentiment is how Lafayette Christopher Hamilton has managed to overcome and excel. His story is not only inspiring but a lesson in building community.

Hamilton is a father of two and a husband who repeatedly credits his stability and inspiration to a wonderful wife. He reflects on his journey with Good News Jamaica. A native of the bread basket parish St. Elizabeth, Hamilton never knew his father and occasionally saw his mother. He lived with his grandparents until he moved to Kingston at age five. He fondly recalls wearing ‘barta creps’ because those were the only ones his grandparents could afford. ‘Barta creps’ in those days were virtually indestructible, unattractive pairs of shoes.

Moving to Kingston changed his life dramatically. Hamilton was now living in a upper class community with his uncle. His mother migrated soon after which negatively affected young Hamilton at first. He was rebellious for much of his childhood years. This slowly changed for the better while attending Calabar High School. His involvement and leadership in sports particularly football began influencing his actions and how he viewed responsibility.

While living with his uncle Hamilton learned valuable lessons in punctuality, business acumen and how to navigate life. He eagerly shares three pieces of advice from his uncle with Good News Jamaica. “Do everything to the best of [your] ability. Treat women with respect and love. Never forget God.” As an ordained Minister, those words have more meaning now than it did then.

After high school Hamilton migrated to the U.S. and joined the Navy. He spent six years there and excelled continuously. This earned him the opportunity to choose any field he desired to pursue. The opportunity, offered by the Chief of Navy Operations was a first for any serviceman.

Over the years, Hamilton has experimented with several business ventures. His most successful to date is Kaymiah Inc. Kaymiah Inc specializes in technical and logistics computer services, live streaming, building websites, among other services. He credits his gift to organize for much of his business success. “To organize things is like 1,2,3 to me.”

However he yearned to do more, especially for his community. Unfortunately, he was unable to because of the challenging economic conditions at the time in 2009. Hamilton was unemployed and on the brink of losing everything. However, his strength and faith in God led him to look beyond his own challenges and to find the inspiration needed. That same year the Jamaican born and raised Lafayette Hamilton founded The PRYDE Foundation.

The PRYDE Foundation ensures the preservation of the mission for youths to become leaders. The objective is to train and support at risk youth ages 17-21 in the areas of IT and customer service. Operating online, the Foundation is a non-profit organization formed by a group of business professionals. These partners come from the U.S. and Caribbean including transnational partners. Hamilton asserts the importance of these partners. “I have very important partnerships with other organizations.”

PRYDE has transformed many lives. The young people who benefit from the Foundation’s support will find opportunities if they commit to working hard. ‘I want the youth to understand that there’s more to life than sitting on a corner… [I want]to be able to give opportunities and teach them how to create opportunities for themselves.” He tells Good News Jamaica.

To that end, the Foundation has launched resource centres, hosted charity events and partners with other causes with similar objectives. A new initiative PRYDE is involved with is My Brother’s Keeper (MBK) Houston. MBK was launched by President Barack Obama and aims to turn around lives and create opportunities for youths. Hamilton shares his training and mentorship expertise with this initiative.

Although a busy man he still finds time for other interests. One such interest is playing music. He plays for the Houston based online radio station Caribbean Vibes radio and used to host his own music show. Going by the moniker DJSolo he has managed to gain a sizable following with his tantalizing soca, dancehall and reggae mixes. However his love for playing music has been put on hold as it conflicts with his faith and ministry.

Undeniably, Hamilton’s enthusiasm and confidence are matched only by his faith and passion for PRYDE Foundation. It is a combination of traits that guarantees success for this Jamaican living in Houston.“Life is short. Do the best that you can with the time given…nothing in life is sweeter than the process” was the final advice Hamilton gave to Good News Jamaica.

0
0   0
previous Shelly-Ann Cawley: The Powerhouse
next Why UNESCO was right to declare reggae a cultural treasure

Sarrah-Ann Allen – Jamaican in the Ivy