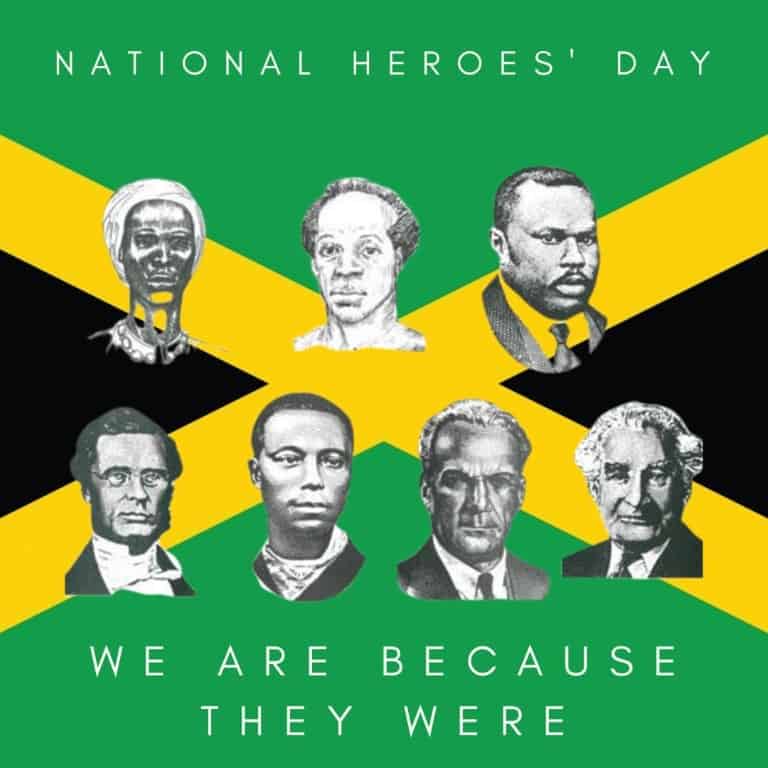 We are who we are today because of selfless many who toiled before us. These individuals envisioned life beyond oppression and slavery. Not only did they devote their lives to ensuring that their vision came to fruition, but some were also imprisoned while others were killed. Today we refer to these valiant individuals as our “heroes”. In acknowledgement of their immeasurable contribution to our nation’s development and freedom, one day has been reserved for the commemoration of their efforts. This day is what we call “National Heroes’ day”.

The seven individuals who have been given the highest honour in Jamaica are:

Marcus Garvey, Jamaica’s first National Hero was born on August 17, 1887, in St. Ann’s Bay, St. Ann. He was a political activist, publisher, journalist, entrepreneur, and orator. He was the founder and first President-General of the Universal Negro Improvement Association and African Communities League. Garvey’s legacy can be summed up in the philosophy he taught – race pride, the need for African unity; self-reliance; the need for black people to be organized and for rulers to govern on behalf of the working classes.

On June 10, 1940, Marcus Mosiah Garvey died after two strokes. He was buried in London due to the travel conditions associated with World War II. His remains were taken to Jamaica and he was buried in the National Heroes Park in Kingston.

Norman Manley was born on July 4, 1893, in Roxborough, Manchester. He is Jamaica’s first and only Premier serving between the period of July 1959 and July 1962.  He along with his cousin, Sir Alexander Bustamante, fought for Jamaica’s independence which was gained on August 6, 1962. He also supported the trade union movement, while leading the demand for Universal Adult Suffrage, as well as he was a strong advocate of the Federation of the West Indies established in 1958. Norman Manley died in 1969 and was given the order of National Hero that same year.

It was Bustamante who is remembered for saying  “Without discipline, we cannot succeed; and with disorder, we will fail.” Alexander Bustamante was born in the parish of Hanover in 1884. He was born as William Alexander Clarke but later changed his name by deed poll. His demanding stature at 6 feet 5 inches put him as the centre of attention where ever he showed up. His oration kept that attention. He was a Jamaican politician and labour leader, who, in 1962 became the first prime minister of Jamaica. He founded the Bustamante Industrial Trade Union following the 1938 labour riots and the Jamaican Labour Party in 1943.

In 1969 Bustamante was granted the Order of National Hero along with his cousin Norman Washington Manley. He is the only Prime Minister to be given this honour and the only National Hero to be honoured antemortem.

Nanny of the Maroons

Nanny was a leader of the Maroons at the beginning of the 18th century. She was known by both the British Settlers and the Maroons as an outstanding military leader who became, in her lifetime and thereafter, a symbol of unity and strength for her people during times of crisis. She led her people with courage and inspired them to struggle to maintain that spirit of freedom, and life of independence, which was their rightful inheritance.

Paul Bogle was a Jamaican Baptist Deacon who was born in St. Thomas. Bogle was also very good friends with George William Gordon. He led the Morant Bay rebellion on October 11, 1865, as a result of Poverty and injustice in the society and lack of public confidence in the central authority. Paul Bogle was captured and hanged on October 24, 1865; but his efforts were not in vain as it made a way for the social and economic betterment of the people. He became a National Hero of Jamaica in 1969.

George William Gordon was born in the year 1820 to a slave mother, Ann Rattray, and a Scottish planter father, Joseph Gordon. Having no formal education, he taught himself to read and write. He entered politics in an attempt to help those who were oppressed. His efforts, however, were futile. He began urging the people to protest against and resist the oppressive and unjust conditions under which they were forced to live. Gordon was arrested and charged for complicity in the Morant Bay Rebellion. He was tried illegally and, in spite of lack of evidence, he was convicted and sentenced to death. He was executed on October 23, 1865. He was given the order of National Hero in 1969.

Samuel Sharpe had said: “I would rather die upon yonder gallows than live in slavery”. He was the main instigator of the 1831 Slave Rebellion, which began on the Kensington Estate in St. James and which was largely instrumental in bringing about the abolition of slavery. Samuel had planned a non-violent resistant, however, it soon became violent as a series of fires broke out in the area. Following the uprise, more than 500 slaves lost their lives. Samuel Sharpe was hanged on May 23, 1832. In 1834 the Abolition Bill was passed by the British Parliament and in 1838, slavery was abolished.