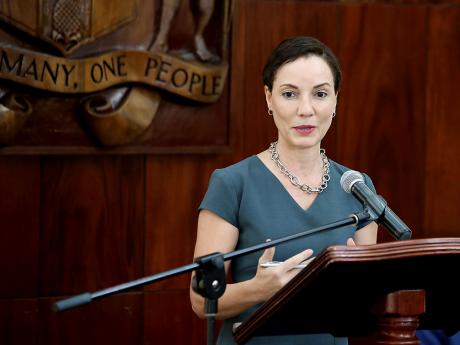 Johnson Smith Brainstorms How To Boost Trade-In The Commonwealth

Johnson Smith Brainstorms How To Boost Trade-In The Commonwealth

Minister of Foreign Affairs and Foreign Trade, Senator the Honourable Kamina Johnson Smith will join 52 Trade Ministers within the Commonwealth grouping, to explore strategies to boost trade with a special focus on inclusive and sustainable trade and the Connectivity Agenda across the Commonwealth.

This Second Meeting of the Commonwealth Trade Ministers will be held on Thursday, October 10 at Marlborough House in London, United Kingdom.

Convened under the theme, “Advancing our Shared Prosperity,” Minister Johnson Smith affirmed that, “This high-level Meeting will allow us to consider concrete actions to support the implementation of the Commonwealth Connectivity Agenda for Trade and Investment. It also creates a timely opportunity for critical discussions on how to achieve economic growth through trade, as well as the approaches countries can adopt to ensure all stakeholders can benefit.”

She continued, “This includes full and equal participation of women in the economy through gender-responsive approaches in developing trade policy and promoting women’s economic empowerment.”

Noting that there are still challenges for many Commonwealth developing country and small states in reaping the full benefits of international trade, the Foreign Trade Minister stressed that, “Trade needs to be both inclusive and sustainable in keeping with the commitment countries made to the global Sustainable Development (SDG) Goals.”

The outcomes of the meeting will shape trade-related discussions at the next Commonwealth Heads of Government Meeting scheduled for June 2020 in Rwanda.

In the margins of the Ministerial Meeting, Johnson Smith will begin her programme of engagements with a bilateral meeting with Lord Tariq Ahmad, Baron Ahmad of Wimbledon, followed by a welcome event hosted by the UK Secretary for International Trade, the Rt. Hon. Elizabeth Truss. She will also attend an event hosted by the Commonwealth Secretary General Baroness Scotland.

Resilient Senior Citizen shares her “Out of Many, One Salad’