Home Health & Environment Powered Up with Wind Energy in Jamaica 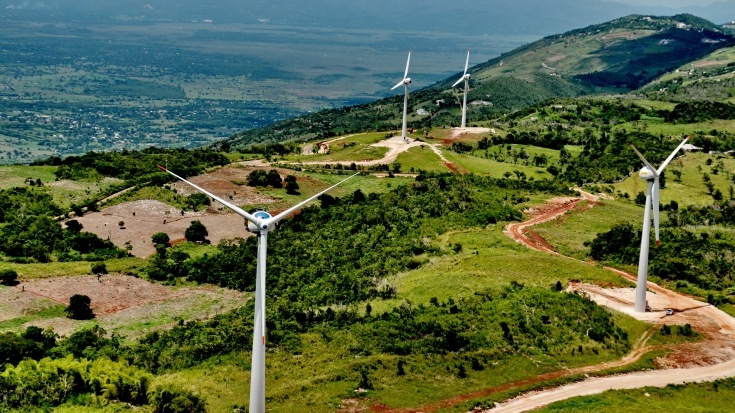 Powered Up with Wind Energy in Jamaica

Powered Up with Wind Energy in Jamaica

We’ve already looked at the great things happening in solar energy in Jamaica. Now, let’s talk a bit about what’s happening with our other great natural resource – wind energy.

In 2017, the Jamaican Minister of Science, Energy and Technology, Dr. the Hon. Andrew Wheatley projected that Jamaica is on course to switching 30% of its energy consumption to renewable energy by 2030.

The principle of generating electricity from wind energy is simple: it’s basically the opposite of a fan. While a fan converts electricity into wind energy, wind turbines convert wind energy into electricity. Each wind turbine is fitted with a number of propeller-like blades which are turned by the energy in the wind. The blades turn around a rotor, which in turn spins the shaft of a generator to produce electricity.

The best-known wind energy plant currently in Jamaica is the Wigton Wind Farm in Rose Hill, Manchester. A subsidiary of the Petroleum Corporation of Jamaica, the Wigton Wind Farm is the largest renewable energy facility in the English-speaking Caribbean. As of 2016, the farm was producing energy at a capacity up to 62.7MW and 3.7% of Jamaica’s total electricity generation.

Another wind energy project was set up in 2016 by Blue Mountain Renewables Jamaica Wind Limited, and this is the largest private-sector renewable energy project in the country (the project is funded by loans from the Overseas Private Investment Corporation (OPIC), the International Finance Corporation (IFC), and the IFC-Canada Climate Change Programme). The 36-MegaWatt facility consists of turbines set up in Postdam, St Elizabeth, and is expected to satisfy about 3% of Jamaica’s energy demand, generating approximately 120,000 MW of energy each year for about 15,000 customers.

The environmental advantages of wind energy are extremely important, as it reduces the reliance of the country on burning harmful fossil fuels to produce energy. For example, the BMR Jamaica project is expected to reduce greenhouse gas emissions by about 66,000 tonnes per year (which is the same as taking 13,000 cars off the road!). Also, wind energy is a renewable energy source, so there is no chance that the fuel might one day “run out” or be “used up”.

And aside from the environmental impact, it’s also great for our pockets! Wind energy is expected to be some of the cheapest electricity available on Jamaica’s grid (Whoopee!)

Even greater than this, we in Jamaica are blessed to live in a tropical island with ideal conditions for producing renewable wind energy. This means that there is potential for Jamaica to become a leading country in supplying renewable energy to other countries who may not enjoy the same natural resources that we do. Renewable energy is one important sector in which Jamaica should be looking toward building economic growth and innovation.

Treat the Flu as a serious health matter