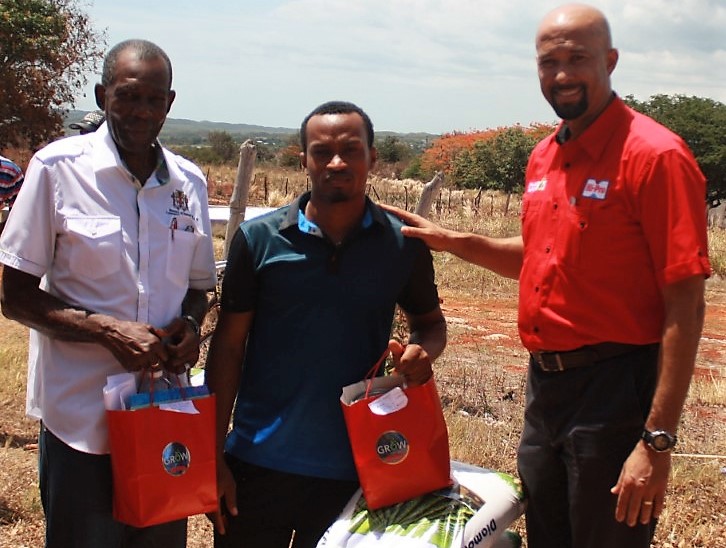 As Government and other stakeholders continue to provide assistance to support the fire-affected farmers of Flagaman, St Elizabeth, Minister without Portfolio in the Ministry of Industry, Commerce, Agriculture and Fisheries, Hon. J. C. Hutchinson, has announced that $5 million is to be provided towards the procurement of grass to be used as mulch to aid the resuscitation of the farmlands.

Mr Hutchinson made the announcement at a Farmer’s Relief Forum hosted by Hi-Pro, at the Pedro Plains Anglican Church in St. Elizabeth on Friday, August 30.

Following the commitment on August 20 of Drought Mitigation Funds of approximately $500,000, intended for his own Northwest St Elizabeth constituency, Minister Hutchinson described the $5 million allocation towards the provision of grass as “an interim amount”.  “But as the assessment continues, we will see how much more we can give,” he added.

He informed that the Government is moving to ensure that the farmers rebound as quickly as possible in an effort to prevent an increase in prices for produce.

“We in the Ministry are doing whatever necessary.  I know it is difficult to get back into production, but we are going to do whatever is possible.  We are assisting you now in getting back some grass because I understand that that is the basic material that you want before you can even start,” he said.

The Minister also assured the farmers that there will be no large scale importation of foodstuff in the wake of the fire.

“Once you are burnt out, people are now coming to say that they want to import all kinds of produce.  I am saying to you now that we are not going to provide for any large scale importation of anything whatsoever. We are looking that by December you should be back on your feet.   If we allow this, we are going to have a glut and, you will not be able to sell your produce at that time.  We have to protect our farmers,” Minister Hutchinson added.

He commended Hi-Pro for coming on board and leading the way in providing seeds, fertilizer, chemicals, fungicides and pesticides to the farmers.

For his part, Minister of State in the Ministry and Member of Parliament for the St Elizabeth Southwest, Hon. Floyd Green, noted that the agricultural sector has suffered significant losses as a result of the fire.

He added that one of the measures being pursued in assisting the farmers is to bring irrigation to the Pedro Plains.

“We are continuing on the programme, looking at the feasibility of bringing water from the Black River up to the Pedro Plains.  The consultants’ midway report for the study has determined that the Black River has the capacity to adequately supply Flagaman and adjoining communities,” Minister Green said.

He advised further that the final report on the study should be completed by December, thereby enabling the Government to allocate further funding for the project’s execution and that the Government remains committed to remedying the adverse drought conditions affecting farmers. “We anticipate that this intervention will increase agricultural production and boost economic growth in Flagaman,” he added.