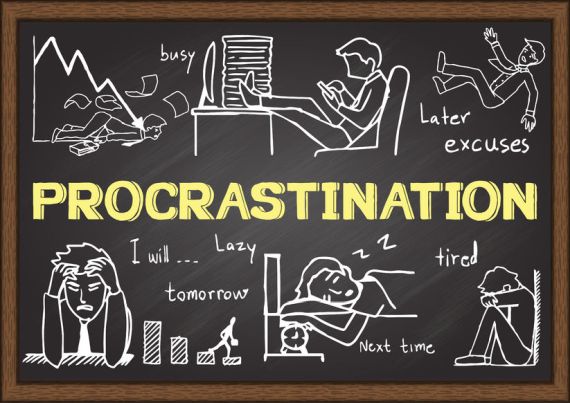 Have you ever found yourself postponing a task because you ‘have enough time’? If your answer is yes, you are guilty of procrastination. Mostly everyone has faced procrastination at one point or another. It is the act of intentionally delaying something that needs to be done. People often confuse procrastination with laziness. However, both are at different ends of the spectrum. According to MindTools, procrastination is an active process as one substitutes the task that they’re supposed to be doing for something else. On the contrary, laziness refers to inactivity or the unwillingness to act.

‘Don’t put off until tomorrow what you can do today.’ – Benjamin Franklin. Saying that you will ‘do it’ tomorrow is one of the biggest lies you can tell yourself. While there are a lot of factors which cause people to procrastinate, the most popular is the belief that they have enough time. Listed below are some of the reasons people procrastinate:

Overestimating the amount of time left, while underestimating how long the task will take to complete results in poor work.  Often times when one procrastinates, they are not able to reach their full potential. This can affect us in many areas of our lives. Procrastination is notorious for ‘stealing’ time and is most times accompanied by guilt. Below are some of the consequences associated with procrastination:

Procrastination is dangerous. It goes beyond work and mental health. Having a persistent symptom and delaying to get it checked can affect your physical health. Also avoiding a difficult conversation only lengthens the conflict. Being a procrastinator can also cause one to feel stuck or trapped. For example, delaying an important life decision such as ending an abusive relationship or going back to school. End procrastination today. You may delay but time will not. ‘A year from now, you may wish you had started today.’ – Karen Lamb.