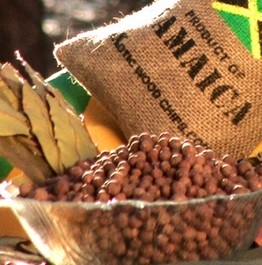 The antibiotic resistance crisis is just one of those things that will probably affect all of us at some point. Basically, the bacteria and fungi that cause everything from sore throats to UTI’s are becoming more resistant to antibiotics, making them harder to kill. There is a huge fear in the scientific community that within the next decade, we would have exhausted our supply of working antibiotics, and we won’t be able to treat these simple conditions anymore.

Luckily, Jamaican scientists may have found an answer right in our kitchen cupboards. A 2017 paper (Lowe, et al) examines the potential of good old Jamaican pimento as the answer to some of our antibiotic resistance woes.

Jamaican pimento, or all-spice, is a staple of Jamaican cuisine. We can all attest to the characteristic spicy flavour that’s behind a good Jerk seasoning. Pimento beans, which are what we use to cook with, come from different species of plants in the Pimenta genus. So far, scientists have identified at least six distinct Pimenta species that are completely unique to Jamaica, including Pimenta dioica, Pimenta racemosa and Pimenta jamaicensis.

But beyond its spicy notoriety, the pimento plant has also been used in folklore medicine to treat a range of maladies from cancer to diabetes to malaria. This study, led by Dr Henry Lowe at the Biotech Research & Development Institute in Jamaica, shows that pimento might also possess special properties to fight fungus and bacteria.

For this research, the scientists extracted compounds from the leaf and bark of the Pimenta plant. Then they tested whether these extracts would stop the growth of a number of different bacteria, including Streptococcus species which cause skin infections and food contaminants such as E. coli and Salmonella. They also tested against the agent of many hospital infections, Pseudomonas and the fungus responsible for yeast infections, C. albicans.

Usually, if a compound can stop the growth of a particular bacteria in the lab, it can be adapted as an antibiotic or antifungal for use in the medical field.

The research team was in luck! The results showed that the Pimenta leaf extracts were able to inhibit the growth of the Streptococcus, Pseudomonas and Salmonella species. Even more than this, the C. albicans fungus species stood no chance against the Pimenta power.

So what does all this mean?

First of all, the study proves that the Jamaican pimento plant could become a game-changer in addressing the antibiotic resistance crisis. Not only did the Pimenta extracts just kill the bacteria, but they worked on a number of different types of bacteria, as well as the fungal species. This means that there is tremendous potential to develop one or more broad-spectrum antibiotic compounds.

Secondly, research like this highlights the usefulness of tapping into Jamaica’s natural resources. Understanding the scientific processes behind many of our trusted “bush” remedies can be the key to unlocking breakthroughs in medicine and science.

Jamaica is a rich collection of natural products and resources, so it is important that we invest in the research required to capitalize on these natural compounds. Cheers to the team at Biotech R&DI on this groundbreaking study!

Do you put crackers/bread in your porridge 👀😋