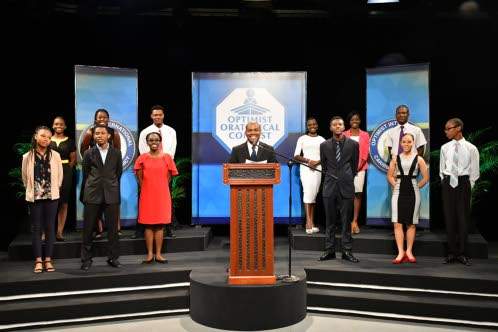 Cornell Knows Everyone Has A Story

Trip To Portland And The Beautiful Frenchman's Cove

An Abundance of Support At Boys' Town; More Needed

What has been described as a “rare occurrence” in the Optimist movement across the globe took place recently when the Optimist International Caribbean District won the three top international awards for 2018 from among 51 Districts, for the second consecutive year.

The district governor for the Caribbean in 2017-2018 was Jamaican Calvin A Hunter, who had responsibilities for over 60 clubs in Anguilla, Antigua & Barbuda, Barbados, Grand Cayman, and Jamaica.

The awards won by the Optimist International Caribbean District were: Highest Percentage of Membership Growth Award; Highest Number of New Clubs Built in a District Award and the Highest Percentage of Honour Clubs Award. That performance also saw the 2017 – 2018 district governor, consultant Calvin A Hunter, receiving a Distinguished and Outstanding Governor Award and the Caribbean District being named the Number One District in all of optimist International. District Governor for 2016-2017, banker Dave Wilson, received similar accolades and the Distinguished and Outstanding Governor Award for that year.

In making the declaration at the recent 101st Optimist International Annual Convention held in Louisville, Kentucky, USA, the organisation’s international president for 2017 – 2018, H Nick Prillaman Jr, said: “It is a rare occurrence that one governor is able to motivate his or her District to this high level of achievement.”

According to Prillaman Jr: “Accomplishing such a feat was a testament to Governor Calvin’s outstanding leadership and his ability to convey his vision and strategy of Growth, empowerment, marketing communication and Saving children (GEMS) through the clubs and members of the Optimist International movement.”

In detailing the criteria by which the 51 districts were judged, the optimist past international president said to achieve the status of ‘a Distinguished District’, that territory would be expected to build a minimum of three new clubs during the optimist year; achieve a net growth of over 25 new members and have at least 25 per cent of the clubs in the district achieve Honour Club status.

“Under the guidance of District Governor Calvin, the district built eight new free-standing clubs and six clubs-within-a-club, resulting in a total of 14 new club credits,” said Prillaman Jr. Membership growth in the Caribbean for 2017 – 2018 reached an astounding 125.07 per cent by enrolling an additional 440 new members, with approximately 60 per cent of the clubs in the region achieving the status of Honour Clubs.

“In fact, the outstanding level of service and growth made the Caribbean the top district in every award category,” Prillaman Jr noted. He said on average, each new Optimist member reaches at least 33 children in a year, which means that in excess of 14,000 more Caribbean children are now being served.

“Governor Calvin has certainly raised the bar of achievement through his hard work, passion, enthusiasm and commitment. He has shown what is possible when one plans well, sets goals and works to achieve those goals. I would describe him as Optimist Strong!” said Prillaman Jr.

According to the Optimist past international president, the quality of leadership which Governor Calvin displayed during his tenure will be a stepping stone for other leadership opportunities within the international movement.

In his response, Governor Calvin said he was pleased that the hard work by his team had been recognised at the highest level of the movement, which has over 2,300 Optimist Clubs worldwide.

“I could not have achieved all we did without the outstanding support of Distinguished Secretary Carlene A Hunter, Distinguished Treasurer Heather Reeves Ambersley, my family, friends and all the Wonderful Optimist Working (WOW) members throughout the Caribbean. I was fortunate to have had a motivated and goal-oriented executive committee, inspirational past governors, coupled with a passionate membership who were eager to make a difference in the lives of the youth of the region,” he said.

Under the theme ‘Optimist Clubs … Saving Children’, the Optimist International Caribbean District launched a regional anti-bullying campaign, ‘Get Up, Stand Up’ under the guidance of Dr Maureen Samms-Vaughn, Samantha Chantrelle and in partnership with Cedella Marley, the Bob Marley Foundation, POW Social, G & A Communications Inc and the Child Protection and Family Services Agency in Jamaica (CPFSA).

The Governor-General of Jamaica Sir Patrick Allen and Governor-General of Antigua Sir Rodney Williams declared that period, ‘The Year of Optimists in Service to Children’, while other Caribbean leaders also endorsed the ‘Adopt an Angel’ programme launched on October 1, 2017.

With an endorsement by the second runner up in the Miss Universe 2017, Davina Bennett, the District raised awareness of the deaf community through its Communication Contest for the Deaf & Hard of Hearing (CCDHH) and hosted the District Oratorical Contest, which was historically televised and rebroadcast by Television Jamaica (TVJ) for the very first time. TVJ partnered with regional telecoms giant FLOW for World Safer Internet Day and executed many other service projects throughout the region.

The stellar service to youth and the success of these programmes attracted new members and propelled the Caribbean District to the number #1 spot among all districts in the optimist movement worldwide in 2017-2018.

The 2018 – 2019 District Governor Marcia P Streete Hendricks, who continues the exemplary service and growth, was among ten Governors who collected the mid-year ‘Pacesetter Award’ at the recent international convention.

Under her leadership, this year’s flagship programme for the Caribbean will be road safety under the theme ‘Keep Our Children Safe: Make Our Future Bright”.

Just A Thought: The Importance of ‘WHY’

How to Make Compost Step by Step | Good News Jamaica