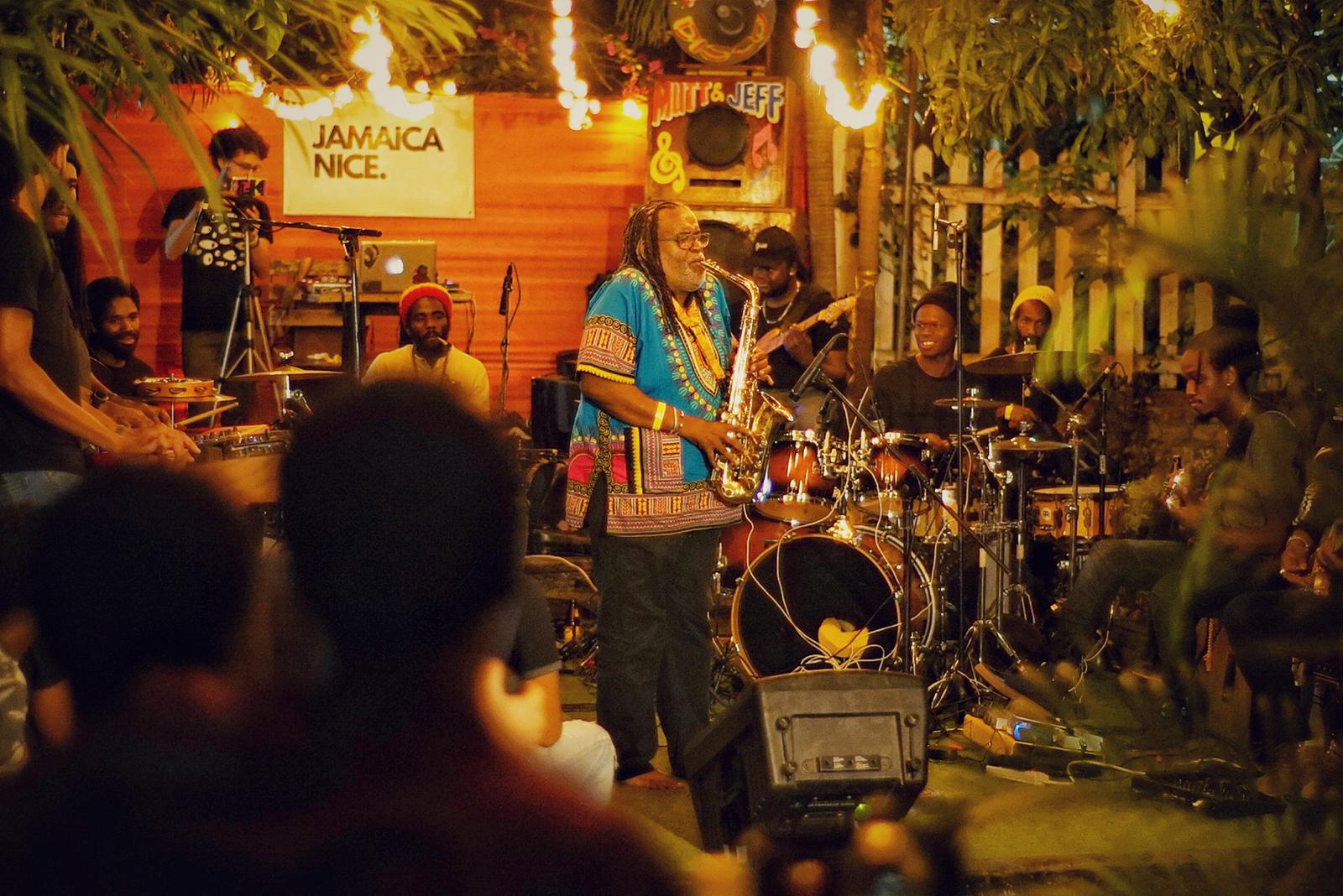 We got a call at about 4 PM. “Are you going to the jam session with Spanky?” Those were the words from Anika Kiddoe, Director of Development at Manifesto Jamaica. When you get a call from Anika asking about your presence at any function, go. You will not regret it. I say this next sentence without any hesitation. When it comes to cultural representation, upliftment, and reinforcement, the organization Manifesto Jamaica is one of Jamaica’s best-kept secrets. Well, the secret is now free. Learn about the organization and volunteer your time, make a donation, or call them to big them up.

Now, to the jam session. Even though Good News Jamaica sent out flyers about Manifesto Jamaica’s compelling vibration moments throughout the week in celebration of the arts, we had no idea how impactful the sessions were going to be. One flyer informed people that George “Spanky” McCurdy would be teaching a master class at Edna Manley College of the Visual and Performing Arts and having a jam session at the Haven. One lovely fact about the Jam Session was that ALL the proceeds would go toward helping the Alpha Institute.

The moment I arrived at the Haven on Hilcrest Road, I knew I was in for something great. First off, the venue was set up in such a chilled way that nothing but greatness could have happened that night. I got to my table, right next to the band, and relaxed to DJ Stamma and his seamless mixing of some really cool tunes. Talk about setting the tone. Every tune that made your head bounce was ready for selection.

After seeing two trap (drum) sets along with two keyboards and cords set out for multiple guitars, I leaned over to Anika and said, ‘this is a session that should have Dean Fraser. ‘ Anika responded that invitations were sent out to many people so ‘you never know’. Within 30 minutes, the instrumental fun got started, and it sounded so sweet. Then, Dean Fraser walked in with his sax in hand… I almost fell out of my chair…. I saluted him like an anxious child and said some inaudible (excited fan) phrase to let him know I’m glad he was there. In pure Dean form, he grooved that place like he had worked with the musicians for many years. It was amazing.

I had a chance to catch up with Mr Fraser after his segment to chat. Take a listen below.

Here is a video of Mr Fraser Jamming with the youngsters (pardon the poor quality). It amazes me that this happened without rehearsal.

Fortunately for us onlookers, the night was not over after Dean ignited the stage. The night was just getting started. For the rest of the evening, we experienced a trap set extravaganza that blew our mind. Spanky took over one of the drum sets and just settled in to take the audience for a ride that I still feel now, days later. The young man is just amazing, and to describe him as anything less, would be an injustice. He started playing the drums when he was three years old and has travelled the world because of his passion and prowess. Like Dean, we caught up with Spanky. He explained how he feels about being in Jamaica, jamming with some of our musicians.

The night was extraordinary, and I thank Manifesto Jamaica, Jamaica Nice, and the Chor Foundation for putting on this fantastic event. It felt good to hear musicians love up each other through sound. Big up to Jah-9 and all the other gifted singers who passed through to add to the energy.