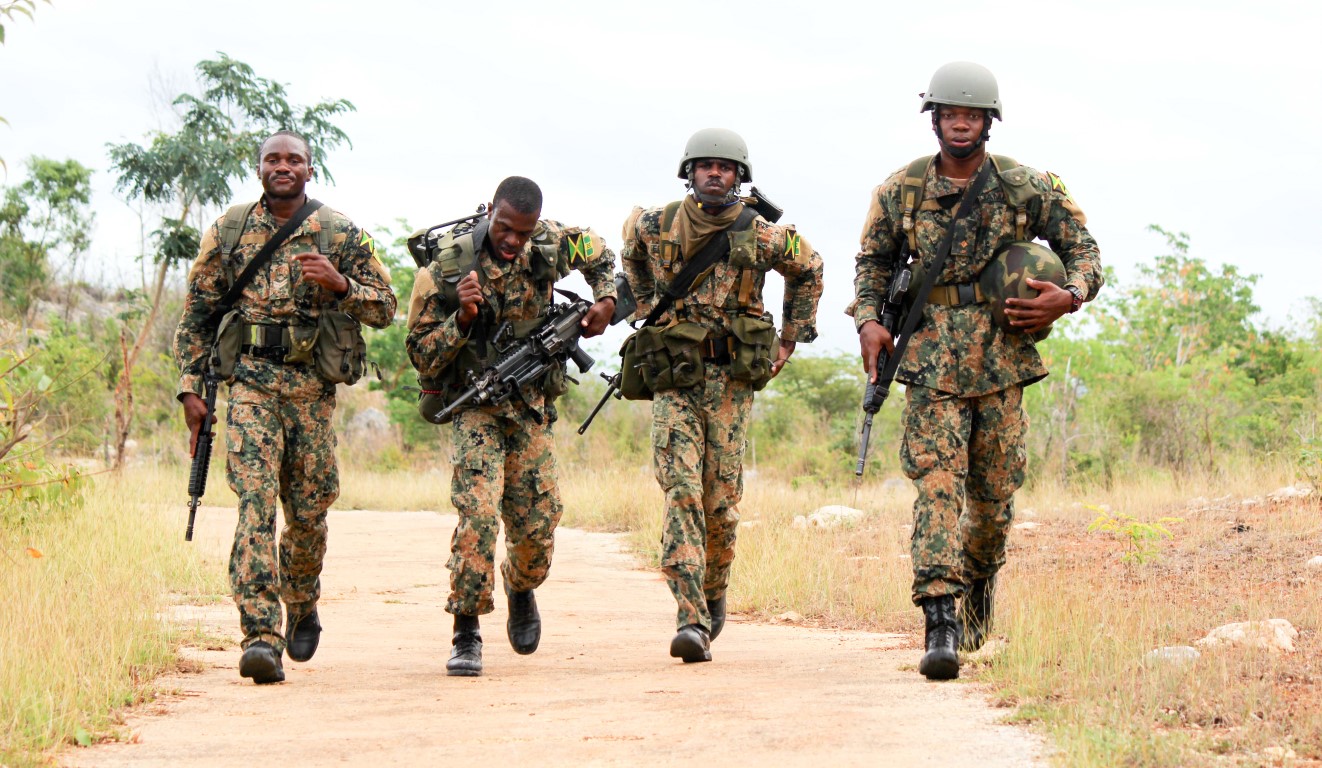 The majority of Jamaicans never think of what is done by the Jamaica Defence Force (JDF) until they are needed to show up.  What most people know is that they are the security force you don’t play with as they have the best combat training.

Headed by Lieutenant General Rocky Meade; the JDF is a vast organization with many different professions focused on protecting Jamaica and its citizens while using resources for advancing the welfare of the whole human race. The JDF fulfils its mission be performing 10 tasks which are as follows; Defend against external aggressors, Disaster Relief, Support to other government agencies and departments, Monitoring and control of airspace and maritime areas of jurisdiction, Counter-Terrorism, Search and Rescue, Peace Support, Regional Cooperation and State Ceremonial Duties.

The JDF is made up of three Arms with 8 sub-units of selected elite practitioners.  “First and Foremost”, as is the motto of The 1st Battalion The Jamaica Regiment represents the ‘on the ground’ response of the JDF.  Expect that when Jamaica needs to respond to attack, it is The First, Second and Third Battalion The Jamaica Regiment that will instinctively move first. “The Combat Arms are the infantry units of the JDF that would engage in direct fire against an enemy. They are normally grouped together in operations to form a potent fighting force.” In support of the Battalion, the JDF engages the Combat support Arms which are comprised of the Coast Guard, Air Wing and Engineers. Their job is to make sure that the Battalion is technically able to carry out their role in battle.  In support of the Support Arm, is the Combat Service Support Arms which perform Administration and logistics services to make sure that the Support Arms are enabled to either help the 1st Battalion The Jamaica Regiment or other agencies with law and order support.

If there is a question about what a person needs in order to join the force, start internally.  Think if you have the needed traits before you even approach the application process.  Do you have discipline, integrity, honour, commitment, courage, and loyalty?  Notice, the word ‘or’ is not in the previous sentence.  Anyone planning on trying to be a JDF member needs to possess ALL the listed traits.  If you pass that test, will you be able to survive the rest??? If so, read on.

Qualifications and Training (Can you make it?)

There are several career paths that can be taken to serve within the JDF and the entry requirements also depend on the area of interest.  No matter where the individual will serve, the JDF is serious about only recruiting the best talent.  Potential servicemen and women do need to satisfy entry requirements including age, height, nationality, minimum educational qualifications, testimonials of character, JDF medical and physical fitness tests and of course, security clearance is a must.  Individuals with interest to serve the JDF as a Regular Force officer or as a Reserve Force Soldier also need to meet a marital status requirement.  If the candidate was successful in meeting the above requirements, a final interview and contract signing are undertaken and then the new recruit departs to undertake basic training.  Basic training is meant to transform an individual from a civilian to a soldier, therefore training is rigorous and includes physical training, weapon handling, drills, map reading, communication skills, first aid and tactical training.  Basic training for officers is also carried out at the New Castle Training Depot and includes a series of physical, mental, and academic tests, all conducted under the most strenuous of circumstances.  While swimming is not on the requirement listing to join the JDF, before ending basic training, the individual must learn to swim and pass the Military Swim Test.

What is understood from the research is that the JDF is an enterprise filled with so many disciplines that it could never be explained in one article.  In order to best represent such an enterprise, it is important to ‘dive deeper’ into its makeup.  As it pleases us to continue to learn about great Jamaican things, people, happenings, history, etc., we look forward to learning more about what happens behind the scenes by our JDF while the majority of us Jamaicans enjoy our freedoms.  As an example, take a look at the following video about the JDF Centres of Training Excellence and ask yourself, ‘did I know that?’.

What we don’t see is what we get