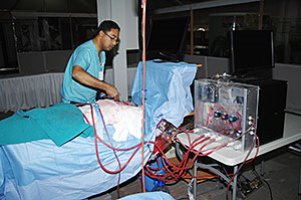 It’s 2018, which means we’re living in the age of artificial intelligence, robots, driverless cars, and automated systems. With all the technological advancements making news across the world, it might be easy to feel like Jamaica is behind the times in this area.

But just as we are pioneers in many other areas, many talented Jamaicans have been carrying the torch for ICT development, putting Jamaica on the map with software development and technological advances.

“We likkle, but wi tallawah!”

Despite the problem of limited resources that accompanies most research in Jamaica, various research groups have made waves in information technology, robotics and software creation. By now, you may have heard of the Cardiac Surgery Simulator, created in 2013 by Dr Michael Coore and his research team at the University of the West Indies (UWI) Mona. The first of its kind, this machine uses artificial blood to circulate through the heart of a pig, simulating cardiac surgery. It has become an invaluable tool for training medical students. It allows them to get the first-hand experience with this type of surgery before going out into the field. This revolutionary machine was conceptualized and created by Jamaicans, in Jamaica!

Other unique inventions have emerged from student research in Jamaica: in 2011, a team from the University of Technology (UTech) created an autonomous robot capable of operating in an earthquake disaster situation. The robot was programmed to search for victims in different locations and report their status as live, unconscious or dead.

What makes these inventions even more remarkable is that Jamaican researchers don’t have access to the same resources as our North American counterparts. But what we may lack in resources, we make up for in creativity. It’s much easier for researchers in the US and the UK to visit a robotics shop and buy parts to help create their inventions. Jamaican inventors, on the other hand, are forced to build all their components from scratch, giving them valuable experience that other researchers in more developed countries may not ever acquire.

Jamaican research into robotics and information technology has continued and grown steadily over time, with many other groups charting their own territory. Institutions are partnering to create training camps and sessions for young persons, in particular, to gain skills in robotics, software and web development, app creation and so on. Training more Jamaicans in these areas opens them up for far more opportunities to apply their skills, both here and outside of Jamaica. It also allows skilled Jamaicans to earn an income through sharing their knowledge with others. In fact, Kimroy Bailey, who was a part of that same UTech robotics team, has since launched his own foundation and businesses. One of these is KB Robotics, which offers robotics training to young people, and consults with CXC to integrate Robotics and Renewable Energy into High Schools across the Caribbean.

Our resourcefulness as a people has very clearly made its way into the software development and application creation sector. Jamaican developers have created apps for everything; from the standard games, news and media, to day-to-day functional apps such as food purchase and delivery. Jamaican apps have even been created for security, agriculture, event management, navigation, education, and even taxi services! Many of these apps have been created by young entrepreneurs who are using their skill set to break into various Jamaican industries and attract the younger generation of Jamaicans.

By integrating information technology systems into already existing industries and business ideas, Jamaicans continue to fashion innovative ways through which they can solve problems while garnering wealth for themselves. In a country that is working diligently to rebuild and strengthen its economy, these innovative ideas are promising steps to a new age of technology and wealth creation.